Lord Shiva in Deep Meditation: Whom does he Meditate upon? 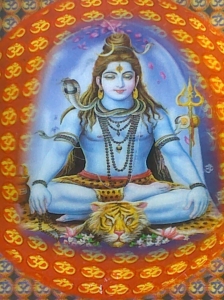 Lord Shiva is the Ultimate Reality. He is both Yogeshwara(Supreme deity of all yoga paths) and Yogishwara, i.e. the Master and teacher of all Great yogis(yoga practitioners/Masters). So, we all meditate on him. In Kundalini Yoga, we  merge with Lord Shiva by the help of his consort, Mother Kundalini(Shridevi Parvati).

Generally, in any Lord Shiva’s picture(see above), we see him in a sitting posture engrossed in deep meditation. This is somewhat puzzling! Right?

So, we are now very curious to know:

Whom does the Lord Shiva meditate upon?

It is both funny and intriguing question indeed!   Short answer: Lord Shiva meditates upon himself. Now, let us delve into greater depths.

Lord Shiva is the full and complete Ultimate Reality himself. There is no need to meditate on anybody else!  In other words, he is always happy and contented being himself. So, he doesn’t have to do anything to seek happiness anywhere outside.

Everything resides within him. So,there is no object of meditation. He is the one and only subject. There is no external object. Here is another interesting question:

You said “Lord Shiva meditates on himself”. But, why?

The supreme bliss(ananda) is the essential nature of Lord Shiva, who is also the Universal Self. It is the Lord’s nature to dwell in his own bliss. According to Scriptures Shaiva agamas,  Lord Shiva is static and his dynamic power is Devi Parvathi. So, he sits and meditates. He carries out various activities through his power, i.e. Devi Parvati.

What mantra(sacred phrase) Lord Shiva could be chanting?

Simple! Lord Shiva may contemplate on Shivoham (I am Shiva)or Soham (He is I) mantra.

How? It is common sense! Just ponder for a moment. Since he is Shiva, he can as well say “I am Shiva”! Moreover, because he is the Universal Self   ( that force which is beyond and above everything), he may even chant “He is I”. This means “I am He, who controls everything viz. the Ultimate Reality”.

Sounds interesting, right? But, think about it a bit more.  If you dig deeper, it becomes very clear that Shiva does not chant anything! Simply because he dwells in pure bliss, where there is no chanting, no mantra or no other second thing. He resides in pure non-dual himself. He is the only One. There is no other one!

What about his consort Parvati? It should be two(Shiva and Parvati), right?

In reality, however, there is only one Shiva. How? Since, Shiva is always one with Parvati, Shridevi Parvati is nothing but Shiva. Thus, it proves that Shiva is only One.

What are the esoteric teachings of Lord Shiva’s meditation?

He is the Supreme Yoga Master(Guru) . So, he is called yogishwara, the Master of all yogis(yoga practitioners). He is the goal and the Lord of yoga (yogeshwara). He is always in asamprajnata samadhi  (subjective meditation) abiding within himself. In this state, there is – “I am the only One” feeling which is beyond all dualities(“two/the other” feeling).  There is no thinking such as as: “I am different”, “I and other one” etc.

So, by his meditative pose, Lord Shiva conveys the great advaitha(non-duality) philosophy,  i.e. myself is not different from the Universal Self. Another teaching by Shiva’s meditation is that we have to meditate upon our own Individual Self with the feeling Shivoham(i.e. “My real me, i.e. Individual Self is Shiva”) to become Shiva!

What a profound message of Lord Shiva’s meditation!

Liked this article? You may want to read the following related discussions as well:

1. Esoteric secrets of Lord Shiva and his family.

Let us pray Lord Shiva for his Grace by chanting:

Highlights from our archive:

1. Are you interested in learning core fundamentals of traditional yoga?

If yes, read the articles in the category: The Pillars of Yoga.

2. Are you stuck in practicing only yoga poses(asanas) for many years going in a circle without knowing the basics? Or

Do you believe in the new age equation: yoga = set of asanas (yoga poses)?

Then, it is better late than never! It is a good time to graduate yourself.  It definitely helps to understand and realize that there are before and after steps of yoga asana  by reading all the articles in the category Raja Yoga in this blog as taught by our Great Master Maharishi Patanjali in his revelations, Yoga Sutras. You will thank yourself that you read these articles! In a nutshell, realize that: Asana is not yoga!

3. Are you a beginner confused by many yoga paths and don’t know which one is the best for you?

You may check out this article to get some guidance.

All the best. Enjoy reading! Have fun!!